Driving your Digital Transformation with DevOps 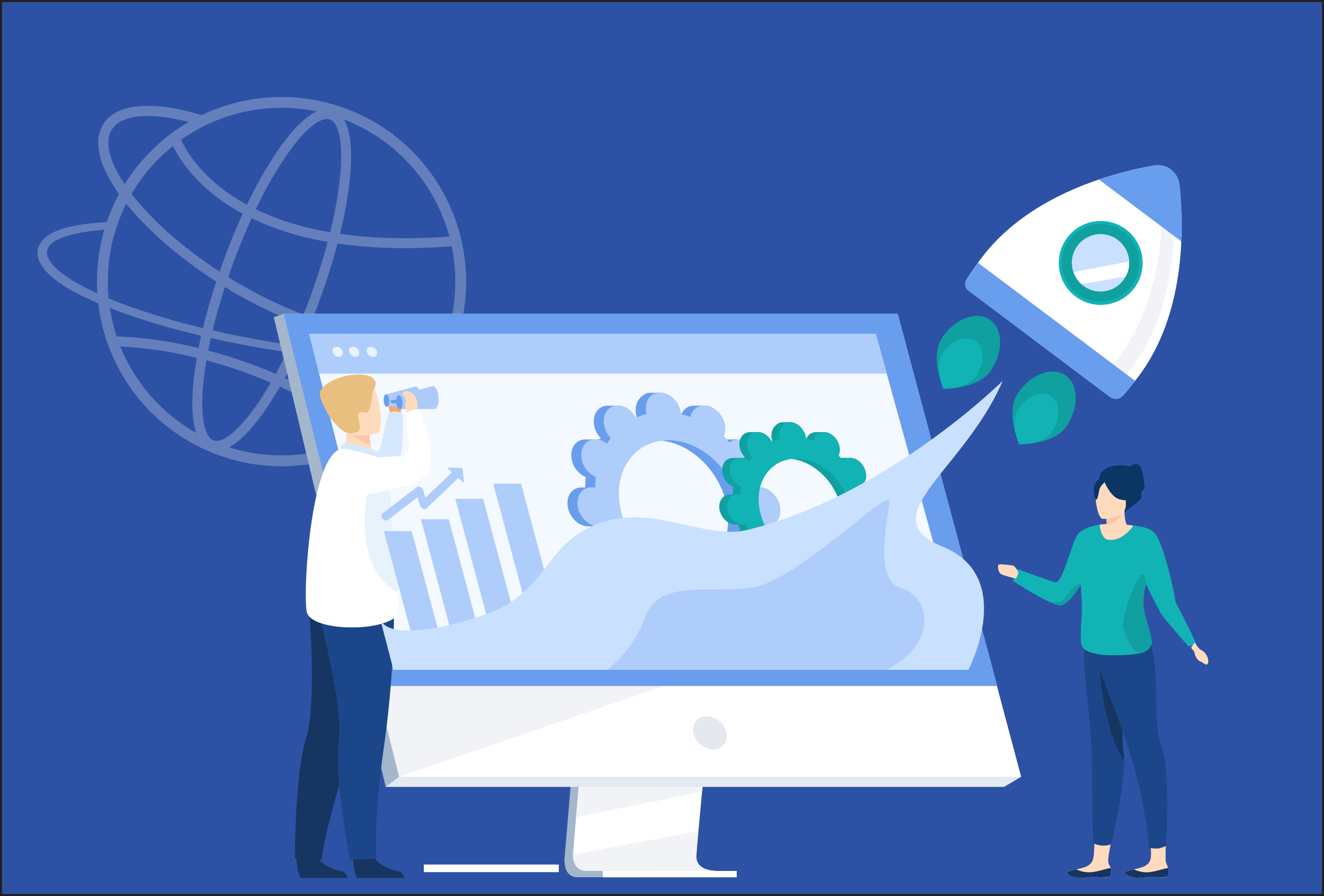 As our technological dependency deepens, clients are demanding faster delivery of high-quality software products. But it can come at a high price. Employees under pressure to increase development productivity and deliver quality software need change in their ways of working.

Digital transformations can improve an organization’s internal operations and consequently, their customer-facing services. Of course, every organization is unique and there are numerous ways to transform. But let’s zero in on what makes DevOps the ideal path:

Why Choose DevOps for Digital Transformation?

At the core of DevOps lies the bridging of differing agendas of those who write code, and those who deploy it. Coders usually want to ship out as much code as they can in a unit of time. On the other hand, operations staff typically want to deliver only what is stable and ready for customers to use.

As seen in the graphics below, elite companies vastly outperform their much less efficient competitors. 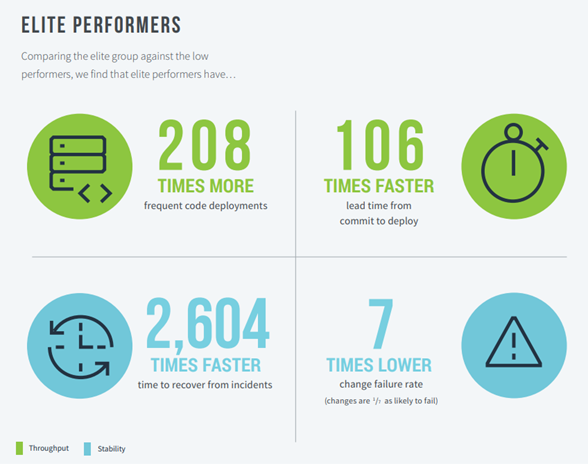 DevOps aims to align everyone behind a common goal, which is quickly delivering stable value to customers. This is partly achieved by creating new workflows that accommodate a variety of people on either side and harness automation processes.

Here is a more in-depth look at how DevOps encompasses the best of these other routes:

At the heart of DevOps lies the Three Ways. The focus of The First Way is to create flow. To create synergy within a company, you need to reduce the extent to which workers and teams are working in operational silos. However, when technology is involved, you have to be a little more targeted in how you connect people.

With DevOps, silos are broken down by combining competencies to develop collaborative responsibilities and expand skillsets. This helps eliminate scenarios where a process relies on one person.

Agile also relies on more open and widespread communication. But DevOps refines this approach by pinpointing the previously disconnected members on both development and operations teams. These team members’ roles are examined to find areas in which their individual goals intersect and how they can collaborate to achieve greater collective results.

Basically, DevOps enables you to do more than just putting in place top-notch tools and creating new schedules. With DevOps you can identify which system feature can be used to help two or more workers join forces. Furthermore, you’re able to reorganize process flows for these collaborative efforts to fit in logically.

During a digital transformation journey, technology won’t just solve problems. It will also discover problems. You’ll learn more about how different teams prefer to work. And observing client behavior when offered products and services will also be enlightening.

You need to be able to harmonize both sides every step of the way. A new internal breakthrough may not immediately translate into increased customer satisfaction. Additionally, a round of positive customer feedback may be received after a grueling and unpopular experience for employees.

In that respect, DevOps doesn’t refer to one particular framework but assumes a holistic approach to improving your software development performance.

This means that teams using the DevOps route can experiment with different frameworks. They  rely on The Second Way—amplify feedback. They then monitor results and find the perfect mix of frameworks that works best for the organization as a whole. Ultimately, you have more room to balance the varying methods of achieving different goals.

The Agile route enhances business productivity by pushing smaller batch sizes where team members constantly focus on delivering the most valuable customer requests. DevOps takes it a step further by introducing automation processes that speed up responses to customer requests and feedback.

With this route, there’s also increased communication among previously conflicting teams. Teams can benefit from a template approach to collecting and responding to feedback. Of course, stakeholders should comment on how quickly they can offer their opinions. But with a clearer picture of what you need feedback on, you can react faster and get more done.

Quality assurance and control can have a tremendous effect on how fast a company delivers to customers. In a digital transformation context, it’s not just about ensuring quality. You have to ensure quality products in the most timely manner possible.

This often means reimagining the stages at which activities like testing come in. In both DevOps and Agile, testing is used to avoid unforeseen stability issues during deployment. Testing may not always happen in the exact same order for both approaches, but will still be largely concurrent with development.

This creates a higher likelihood for both testing structures to fuse with each other to some extent. The DevOps route can accommodate continuous repositioning of testing activities to achieve faster delivery of stable products.

Lately, shifting left on security has been a growing topic. Mainly due to the large costs associated with hackers disrupting or assuming control of company operations as in the case of Colonial Pipeline. Again DevOps provides guidance on how to adapt security competencies and automation of security testing into your teams.

How Does DevOps Enable Digital Transformation?

When looking at the strength of DevOps in driving digital transformation, let’s remember that one of the main goals is to increase software delivery performance and business performance. DevOps feeds into this objective in a number of ways.

Through documentation and automation, DevOps removes the fluff from various processes and simplifies development and operation workflows. The idea is to get every delivery to progress in the same order by identifying and filling any gaps in processes and communication.

By doing so, you reduce the chances in which some projects check every box while others miss a few steps. With several teams integrated, DevOps can top up with agile methodologies like Kanban.

This helps break down projects into their smallest components and continuously monitor the flow of deliverables. This more detailed visualization also enables leaders to check in with team members more frequently. Subsequently, sub-projects are less likely to stagnate and team members can stay ahead of deadlines.

Learn more about the 7 wastes of Software Development here.

Just like with Agile, DevOps encourages continuous testing with each piece of work product completed. Even better, it incorporates automation into testing so that tests occur faster and on a larger scale.

The Agile route often prioritizes speedy code shipping over stability, which may not be such a big deal for small teams. However, larger enterprises working on more complex projects can’t afford to use the same approach. This is why DevOps’ scaling capabilities are more appealing for secure digital transformation efforts.

By testing every feature upon completion, you have fewer flaws accruing and waiting to surprise you further down the road. The final product version deployed will be less prone to crashes or breaches from malicious actors.

When software is being developed, shareholders are going to weigh in at some point. The same goes for customers. Traditionally, this would happen when there’s a complete product in place. The problem is, sometimes feedback from shareholders conflicts with customer requests.

Customers are drawn to what they find useful and want to see expansion. Shareholders may have a different vision. For example, their feedback might focus on a particular use case or leave room for growth in another sector.

The Agile path does a good job at responding to customer feedback fast, but it may still be lacking. DevOps helps to gather both customer and shareholder feedback from the early stages. Teams can then respond to this feedback progressively and pay extra attention to any conflicts in advance.

This approach produces a final product that delivers maximum value to customers while making absolute business sense for shareholders.

DevOps is oriented towards continuous deployment and release that may happen daily or even several times a day. With the ultimate goal being to deliver value quickly, there’s a need to have customers weigh in often. Furthermore, user feedback should be incorporated into the next delivery in a timely manner.

Since DevOps can house other Agile methodologies, team members can quickly test and learn from their discoveries. Consequently, team members can pick out the right points along the journey as to where to gather feedback. They can also easily zero in on the points where this feedback is best infused into the product.

The intervals between can be further refined on different fronts such as the tools and number of people needed, the order of communication and contribution, overtime, etc. This enables teams to always have an idea of what they are trying to learn, and how they’ll respond to it without warping the overall cycle.

DevOps takes the best of the other routes to improve the digital transformation journey. Nevertheless, DevOps can’t always manifest in the exact same way for every organization.

Team leaders have to come together and draw a clearer picture of how their organization has been operating. From here, they can choose the appropriate methodologies to couple with DevOps. They’ll have to answer questions such as the level at which automation processes come in, which departments will adopt specific methodologies, etc.

Some minor practices may remain limited to IT teams, while others will be spread throughout the organization. As long as developers, business leaders, and system administrators start speaking the same language, any hurdles encountered will eventually be overcome.

You can find more of his writing at https://agilerasmus.com/wordpress/